Live in London at Pizza Express 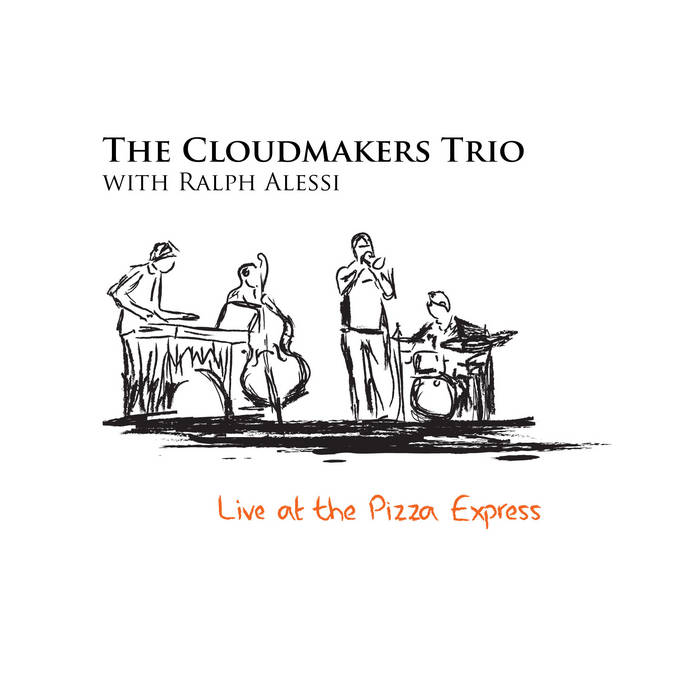 The Cloudmakers Trio Live at the Pizza Express is the debut Whirlwind release from vibraphonist Jim Hart and his fourth solo album to date. The album features guest trumpeter Ralph Alessi, and claims a ground between New York's downtown sound and the modern European tradition. With original compositions by Hart, Alessi and ‘Bye-Ya’ by Thelonious Monk, the music retains all the brightness and timbre of the live moment, recorded in the intimate surroundings of the Pizza Express Jazz Club in Soho, London.

At the time of the recording, the Cloudmakers Trio had been performing as a unit in many different configurations for over seven years, working across multiple genres of music while performing as solo artists with everyone from Wynton Marsallis to Evan Parker to Sir John Dankworth to Outhouse Ruhabi to Lee Konitz to Robert Plant.

Consisting of Hart on vibraphone, Michael Janisch on double bass and Dave Smith on drums, the trio serves as the focus of Hart's new compositions and arrangements. They officially formed in July, 2010 and embarked on a tour around the UK (which included Alessi on trumpet) and fortunately the music on Live at the Pizza Express was captured live.

In a recent interview, Jim Hart tells his thoughts on this project:

"Working on the music for this tour was, at the time, the most musically rewarding and clearly focused project I had been involved in. I had been listening to Ralph Alessi's records for a long time and saw him perform live as well, and I really had gained an understanding about what it was in his music that connected with me. It has a playful simplicity which belies the fact that it's not easy to play. It is complex in it's simplicity and his improvising is the same. Ralph's trumpeting has such melodic clarity to it, and each idea is dealt with fully, even as he explores and develops. Playing with him every night for that week I experienced a different feeling about how time was passing. He seemed to be so in control of his own pacing, and I felt it rub off on all of us in the ensemble. It was a great learning experience and I think that those concerts were probably the best I've ever played at the same time as feeling completely relaxed and comfortable. I was able to listen to everything.

Before the tour I wrote music that I could 'hear' Ralph playing on. A few rhythmic games and some angular-- but not uncomfortably so-- harmonic and melodic shapes. What was very satisfying was that Ralph played just as I had hoped he would on my new compositions whilst simultaneously surprising us on the bandstand. I guess I was expecting him to surprise me! I was also really pleased with how well his tunes mixed with my own during the set. John Fordham of the Guardian in his critic of the performance confirmed this when he wrote: "They share an interest in maze-like melodies and tricksy time signatures – but they don't let their music's intelligence furrow either their brows or the audience's...what a bright idea this meeting of sympathetic minds had been."

As for my new working band which I call 'The Cloudmakers Trio' made up of myself, Michael Janisch on bass & Dave Smith on drums, well, we did our homework. We rehearsed together for whole days at a time just playing and playing before the tour started. It is the most prepared I have ever felt for any musical situation. It was during these rehearsal's that I realised that this trio was going to have a future of its own beyond the tour with Ralph. This shared preparation mixed with the diverse range of musical experience that each of us brought to the table were such a great combination. Dave and I had lived together for nearly 8 years and he had been in my previous group Gemini. As we are both drummers, we had spent hundreds of hours talking about, working out and practicing rhythmic ideas, not to mention we had played hundreds of sessions and gigs together. But as well as that practical experience, we had listened to and discovered so much music in the house and also as part of the Loop Collective and working together to programme gigs, festivals, etc. Michael and I have played together since he arrived in London now eight years ago. Having worked for him in a number of situations including two tours with Joel Frahm and going to NYC to record his debut album with a subsequent 30 date tour, we had developed a very strong musical relationship. Michael had also played some gigs with Gemini and the combination of him and Dave together felt really great.

Once we had learned the music we added Ralph to the mix and at that point just had some fun. And this album wasn't planned. We asked Luc at the pizza to record it as a bootleg, but when I heard it a few weeks after the tour finished, I was transported right back in the moment of playing and I just thought 'I want to put this out.' It is a snapshot of the tour for me. Everyone plays great and it just sounds sounds open and relaxed – but exciting. That is how I would sum up the music we made that week. Open, relaxed and exciting."

"Hart is being aligned with an emerging set of exciting, forward-looking contemporary vibraphonists such as New York's Chris Dingman, Matt Moran, and Chicagoean Jason Adasiewicz...Hart's new rhythm trio is certainly going to be one for the future...The American London-resident double bassist Michael Janisch and drummer Dave Smith combine with Hart in an assuredly airtight yet elasticized trio. Alessi invigorates the music with his witty, unexpected turns of phrase and visceral, blustery trumpet sound."
★★★★ Jazzwise Magazine

"The Cloudmakers Trio brings together three of the most inventive players on the UK scene... joined by New York trumpeter Ralph Alessi. It's a beautifully recorded set...[Alessi] is an empathic frontline partner for Hart, the two men moving readily from duets, in which each complements the other's sound."
All About Jazz

"Every note counts in vibraphonist Jim Hart’s Cloudmakers Trio. The combination of the trio (vibes, bass and drums) with much- admired US trumpeter Ralph Alessi makes for an uncluttered, open-textured sort of music in which every instrument makes a distinct and discernible contribution to what is nonetheless an unusual and very integrated group sound."
★★★★ The Irish Times

"This is an intense, virtuosic but immediately accessible recording of four utterly compatible musicians in jostling, fierce interactive mode. A treat."
London Jazz

"The instrumentation and the playing styles of all four guarantee lots of lovely space, and their ability to build intensity without ever shouting or getting rowdy makes for an absolutely compelling listen. The recording sound is excellent. A triumph from Whirlwind Recordings."
The Jazz Breakfast

"The UK based trio led by vibraphonist Jim Hart collaborate with the US trumpeter Ralph Alessi in a superb small group performance happily documented for the delectation of the jazz listening public...A constant joy from start to finish."
★★★★½ The Jazz Mann

"The vibraphone remains one of the great unsung heroes of jazz's arsenal but young British virtuoso Jim Hart has the wit and invention to make its mercurial charms immediately and abundantly apparent."
The Metro

"Vibraphonist Jim Hart put the Cloudmaker Trio together with trumpeter Ralph Alessi in mind, and, at this 2010 club date, the transatlantic combination worked a treat. Hart’s warmth is both complement and counterbalance to Alessi’s brittle, breathy sound, and the vibraphonist matches his downtown New York guest for technique and imagination. The quartet’s thoughtful and detailed improvisations combine intimacy with firm rhythm – bassist and drummer Michael Janisch and Dave Smith mark every fluctuation – and are full of geniality and fresh ideas."
★★★★ The Financial Times

"[Harts'] flowing solos, unison lines and counterpoint passages with trumpeter [Ralph Alessi] give an indication as to why he was one of the small number of Brits nominated in this years Down Beat Poll."
Bebop Spoken Here

"They share an interest in maze-like melodies and tricksy time signatures – but they don't let their music's intelligence furrow either their brows or the audience's.... What a bright idea this meeting of sympathetic minds had been."
★★★★ The Guardian

"A classy release, with great artwork and live sound... the Cloudmakers allow once more a good hard look at Jim Hart’s outstanding vibes playing... this release will also do much to raise the profile of Whirlwind."
★★★★ Marlbank

"Hart continues his impressive development, adding clever use of loops and effects pedals to a virtuoso command of his instrument, while Alessi's lithe but tough trumpet work is a powerful and inventive addition to the band."
The Scotsman

"This was a gig that rewarded those listening closely enough with some exquisite moments, on a par with the finest post-bop around today."
London Jazz

"London-based vibraphonist Jim Hart and his guest, trumpeter Ralph Alessi, a leading light of New York’s jazz scene, began by stealth and within two numbers, one written by each, had illustrated the compatibility that drew them together."
★★★★ Scotland Herald

"The rhythmically tricky 'Door In The Wall' (by Hart) was negotiated with authority by this, the cream of London’s first call rhythm section players, followed by solos from both Hart and Alessi which served to demonstrate why both are regarded as some of the most exciting improvisers around."
Jazzwise Magazine

"As at the gigs, Hart's theme Passwords is a highlight – a rising, twisting, staccato piece over a fast pulse that loosens Alessi's full repertoire of full-toned improv lines, before a contrasting and mercurial vibes solo by the composer. Alessi knows the jazz tradition well, but takes his pick on phrasing – he displays agility, wide range, and lines that suggest contemporary classical music as much as jazz."
★★★★ The Guardian