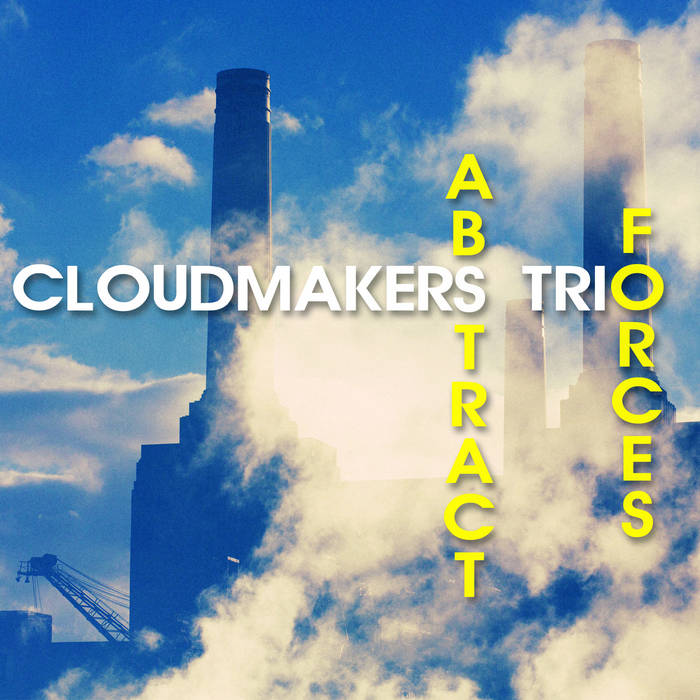 Abstract Forces is the second release from Cloudmakers Trio, the brainchild of vibraphonist Jim Hart which features Whirlwind founder Michael Janisch on double bass and Dave Smith on drums. The album is a mix of strong grooves, catchy hooks and, as the title suggests, very open improvising. Hart's writing explores different textures, moods and eclectic sound worlds, rendering the music unpredictable and exciting while at the same time beautifully accessible.

The album is an organic continuation of a well-established musical relationship originally formed to collaborate and record with the NYC-based trumpeter Ralph Alessi in 2010 (the result was the Cloudmakers' debut Live at the Pizza Express, one of the most lauded albums of 2012 in the UK jazz/improv press). It was during the buildup to the tour and recording of the live album that Hart had the good sense make this trio the focus of his new compositions and arrangements.

Hart explains: "After years of playing together as a rhythm section for many artists, Michael, Dave and I decided to get together and prepare new music for a collaboration with Ralph, and during those rehearsals we three played a lot, sometimes up to eight hours a day. It was during these rehearsals that I realized it was the right moment to begin exploring, in greater depth, what potential the 'vibes trio' might have. I began writing music just for the trio and over the last four years we have developed and expanded the repertoire through regular touring. This record is a document of where we're at in this process and I am extremely proud of it. It can sound much bigger than just three players at times whilst also having the dynamic interplay that you can only have in a trio.

For me, Abstract Forces is also the culmination of more than ten years of experience performing as a vibraphonist, as well as leading bands and writing for this instrument. Since I formed my first quartet band 'Gemini' in 2003 I have been trying to develop a sound and an approach to the vibes as the only harmony instrument in the ensemble. It is a role that I have always felt under exploited for the the vibes and I have made it my mission to do something about that. In a way I have been quietly developing Cloudmakers Trio from within various quartets since that time.

The name of the group and album comes from the analogy of a trio of rhythm section instruments acting as an engine room within the music. I thought of it like a power station that also produces clouds which have an abstract, ethereal quality to them. Our music is definitely highly charged and has a strong rhythmical focus on the one hand, but at the same time it is absolutely jazz in that it celebrates the freedom and openness of improvisation without being constrained by the compositions. There are abstract forces at work."

"London-based Cloudmakers Trio shakes up everything in sight on its second release. Abstract Forces further highlights the group’s exceptional vibraphone-bass-drums telepathy... Draws from such diverse musical worlds—including free-jazz, funk, electronic experimentation, pure swing and unbridled improvisation... Their music is not only impossible to resist, but gets better with repeated plays."
★★★★ DownBeat Magazine (Album of the Year list)

"The dialogue is impressive producing auditory feast of contrasting sound effects that run the gamut of contemporary influences from post modern jazz assertiveness to world music diversity and trance like meditation... The music could reasonably be described as a concerto for three musicians."
Jazz Views

"British vibraphonist Jim Hart has lead a search for abstraction on his second trio album with bassist Michael Janisch and drummer Dave Smith. While on a structural level the album claims clarity, objectivity and independence, one can find on the album no melodies in the classical sense, no usual harmonies or linear rhythms. Cloudmakers Trio have found their own unified, introspective abstraction."
Jazz thing

"The minimalism and complexity work closely together... 'Angular Momentum' - a tour de force and the second piece on Abstract Forces - is a song of which even piano trios would have a hard time keeping up."
Fidelity

"This British vibraphone trio is carving its own individual path between groove and improvisation and is at home allowing Jim Hart (vib), Michael Janisch (b) and Robert Plant drummer Dave Smith (drums) to explore their penchant for rocking riffs and distorted sounds in their especially metric and interactively complex compositions. Very enjoyable."
Concerto Magazine

“Jim Hart is the master of the vibraphone's metal bars, and conjures from it the most colorful of sound waves. The album is sophisticated and dynamic and although extremely energetic and rhythmically tricky, there is never a lyrical moment missing on this CD in anyway. Both poetry and power are elegantly balanced.”
Sound & Image

"It's one of the most exciting and persuasive jazz albums to have come out of the UK's recording studios so far this year."
★★★★ Jazzwise Magazine (Album of the Year list)

"Hart has a positive genius for rhythmic hide-and-seek. His improvised lines grab your attention and won’t let go, no matter how many tricky corners he gets into. There’s no mistaking the musicianship and phenomenal togetherness of all three."
★★★★ The Observer

"Smith’s skittering drums, Hart’s strange augmented, almost theramin-like responses and the moody lines that Janisch pulls out speak volumes of their patient, attentive approach to building space and adventure into their music: it’s all utterly bewitching. The definition of a top-drawer trio to my mind is one where each plays an equal role in performance, introducing ideas and leading the music into new places. This is certainly true of Abstract Forces."
London Jazz

"A strong mix of grooves, catchy themes and variations with a lot of open improvisations. Hart's compositions explore the various structures, moods and eclectic soundscapes in which he makes the music on one hand difficult to predict and exciting but on the other hand still wonderfully accessible."
Medien Info

"Vibes player Jim Hart, double bassist Michael Janisch and drummer Dave Smith combine their remarkable individual talents in this stimulating album. Jim's varied compositions cover a wide range of moods and tempos on a set which is both virtuosic and thoughtful."
The Northern Echo

"It is a powerful combination, and the inventive soloing and intricate interplay between the three instruments is both absorbing and consistently engaging."
★★★★ The Scotsman

“In addition to creative work he does with rhythm and soloing, Hart also uses the vibraphone to create soundscapes and atmospheres like a painter.”
Musik an sich

“Abstract Forces is the the true culmination and the essence of Jim Hart's more than ten year career as a vibraphonist, band leader and composer.”
Rhein Main Magazine

"What Jim Hart demonstrates above all else on this latest album is just how much space the vibraphone can fill, both as a lead and comping instrument, creating an other world feel that even an acoustic piano may struggle to replicate."
★★★★ UK Vibe

"An album of solid grooves and free improvising create the foundation for a high quality eclectic contemporary Jazz record... Should you ever have the opportunity to catch them live then I recommend that you do so."
Bebop Spoken Here

"Fiercely interactive trio... The musical intelligence and sophistication of each member of the trio is gloriously apparent throughout as they make playing this often complex music sound easy."
★★★★ The Jazz Mann

"To take the instrument [vibraphones] to more abstract places takes effort, motivation and a good deal of thought. Vibist Jim Hart on Cloudmakers trio’s Abstract Forces has managed to draw out the many complexities of the instrument on seven of his own knottily absorbing compositions."
Marlbank

"It's an album of throbbing, contemporary grooves and punchy groove-melodies that see Hart play the roles of line player and rhythmically calculating percussionist all at once."
★★★★ Jazz Journal